How Much of This Is Going to Be on The Test? 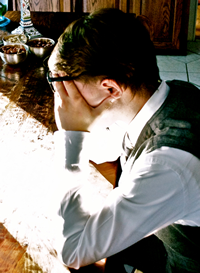 You are not the first A&P student to run into this issue!

That’s always a problem—especially near the beginning of A&P 1—figuring out what’s important to study for the test and what’s not.  Unfortunately, there’s no easy answer.

First, every teacher is different.  So I could give you some precise guidance if I was teaching your class, but not so much for another teacher’s class. So really, your only option for really focused help in figuring out what'll be on your test is to go have a chat with your professor.

I'll never forget the first time I went to chat with a professor about this back in the olden days when I was a student.  It was after our first test, when it became clear to me that I'd missed the mark in my studying. Our professor was very serious in class—not the sort I would think wanting students bothering him outside of class. But after class, my buddy said "let's go" and led me down the hall.  I thought we were meeting up with another friend or something. But my buddy just walked right into our professor's open office door and asked, "can you help us figure out how to study for your tests?" I don't think I'd ever have visited a professor's office on my own.

You know what happened?  He gave us a huge smile, offered us each a chair, and chatted with us for almost an hour.  And wow, did we learn a lot about what to expect on his tests—as well as some general study tips that I still use to this day.  I think most students hesitate to take this step.

Your professor is the one making up the test, after all.  So bring your notes and your other course materials with you and ask for some pointers.

Before doing that, I would look carefully at the course syllabus.  Often, there are hints (or outright guidance) on what’s important.  One hint would be any course objectives or learning outcomes.  If the instructor put them there, then this is what they want you to know.  The problem is that often they are very general, but at least it gives you a start.  If the syllabus tells you to do specific things to prepare, like answer questions in the book at the end of the chapter, then the teacher expects you to know that particular information.

Then, think about what the professor presents in class, online, and in discussions. Most instructors often say something like, “when you get this on the test, be sure you know it” or some other hint like that.  I tell my students to put a star in their notes EVERY TIME I say something like that.  Because we teachers don’t say that unless we KNOW it’s going to be an item on the test.

If it's too late for that in studying for your upcoming test, you can still go back over your notes and perhaps jog your memory about whether they said anything like that.

I always tell students to ask if there are copies of old tests you can look at.  Sometimes instructors will let you see them, sometimes they won’t.  But you won’t have a chance if you don’t ask.  Looking at old tests helps you figure out an instructor’s approach to testing—a huge step toward preparing for their tests.  The good news is that the more of that professor's tests that you take, the better you will get at taking them.  The bad news is that you may not have really had that chance yet.

Another tip is to form a study group.  Talking things out among several students often helps each of you focus your learning.  Be sure to meet with your study group just AFTER the test, too.  Then, y’all can talk out what happened on the test and look for things that will help you in future tests.  For example, “wow, she tested only on what was on the slides” or “wow, she tested on some things that were not on the slides” or whatever.  That’ll help you prepare for the next test.  Study groups have been shown to be the BEST way to prepare for a test.

Lastly, I’ll tell you that my experience talking to students in A&P classes that come to me wanting to know how to focus their study for a test is that I often give them some specific advice that I didn’t have time to talk about in class.  Sometimes even saying things like, “no, that topic won’t even be on the test” or “there will definitely be a matching section on that concept” or “I’ll ask you to identify the functions of ALL the organelles.”   Make sure you write all that down while you chat.  Or at least do that out in the hall just after leaving your professor's office, so you don’t forget.

So, in a nutshell, talking to your teacher about your next test is the best strategy.

Posted by Kevin Patton No comments: